Trump summoned to testify to Jan. 6 US Capitol riot panel

Former President Donald Trump was ordered on Friday to testify under oath and provide documents to the House of Representatives committee investigating the Jan. 6, 2021, attack on the US Capitol by his supporters.

The committee said it had sent a subpoena to Trump requiring documents to be submitted to the panel by Nov. 4 and for him to appear for deposition testimony beginning on or about Nov. 14.

Deposition testimony often refers to closed-door, videotaped questioning of a witness on the record. Such testimony could be made public and become part of a final report by the special panel.

“As demonstrated in our hearings, we have assembled overwhelming evidence, including from dozens of your former appointees and staff, that you personally orchestrated and oversaw a multi-part effort to overturn the 2020 presidential election and to obstruct the peaceful transition of power,” the committee wrote in a letter to Trump on Friday.

The committee is seeking a wide range of documents from Trump that would detail communications he may have had over a period of several months leading up to the Jan. 6 riot and beyond with lawmakers, Oath Keepers and Proud Boys members, as well as associates and former aides, including Roger Stone, Steve Bannon, Michael Flynn and Rudy Giuliani.

Additional documents, text messages and other communications being sought relate to information detailing possible travel of people to the Capitol on Jan. 6, 2021, communications relating to efforts to encourage state legislatures or lawmakers to take actions that would have delayed Congress’ certification of the presidential election or changes in states that would have certified an alternate slate of “electors” that would support naming Trump as the winner of the 2020 election.

Trump, who regularly refers to the panel as the “unselect committee,” has accused it of waging unfair political attacks on him while refusing to investigate his charges of widespread election fraud.

He is not likely to cooperate with the subpoena and could simply try to run out the clock on a committee whose mandate will likely end early next year if Republicans win a majority in the House in November’s midterm elections.

Thousands of Trump supporters attacked the Capitol on Jan. 6, 2021, after Trump delivered a fiery speech at a rally near the White House featuring false claims that his defeat in the 2020 presidential election by Democrat Joe Biden was the result of fraud.

The assault saw rioters smash through glass and battle police. Five people including a police officer died during or shortly after the riot, more than 140 police officers were injured, the Capitol suffered millions of dollars in damage and Pence, members of Congress and staff were sent running for their lives.

The committee announcement came hours after Steve Bannon, a former adviser to Trump, was sentenced to four months in federal prison for refusing to cooperate with the panel’s investigation. He is free, however, pending his appeal. 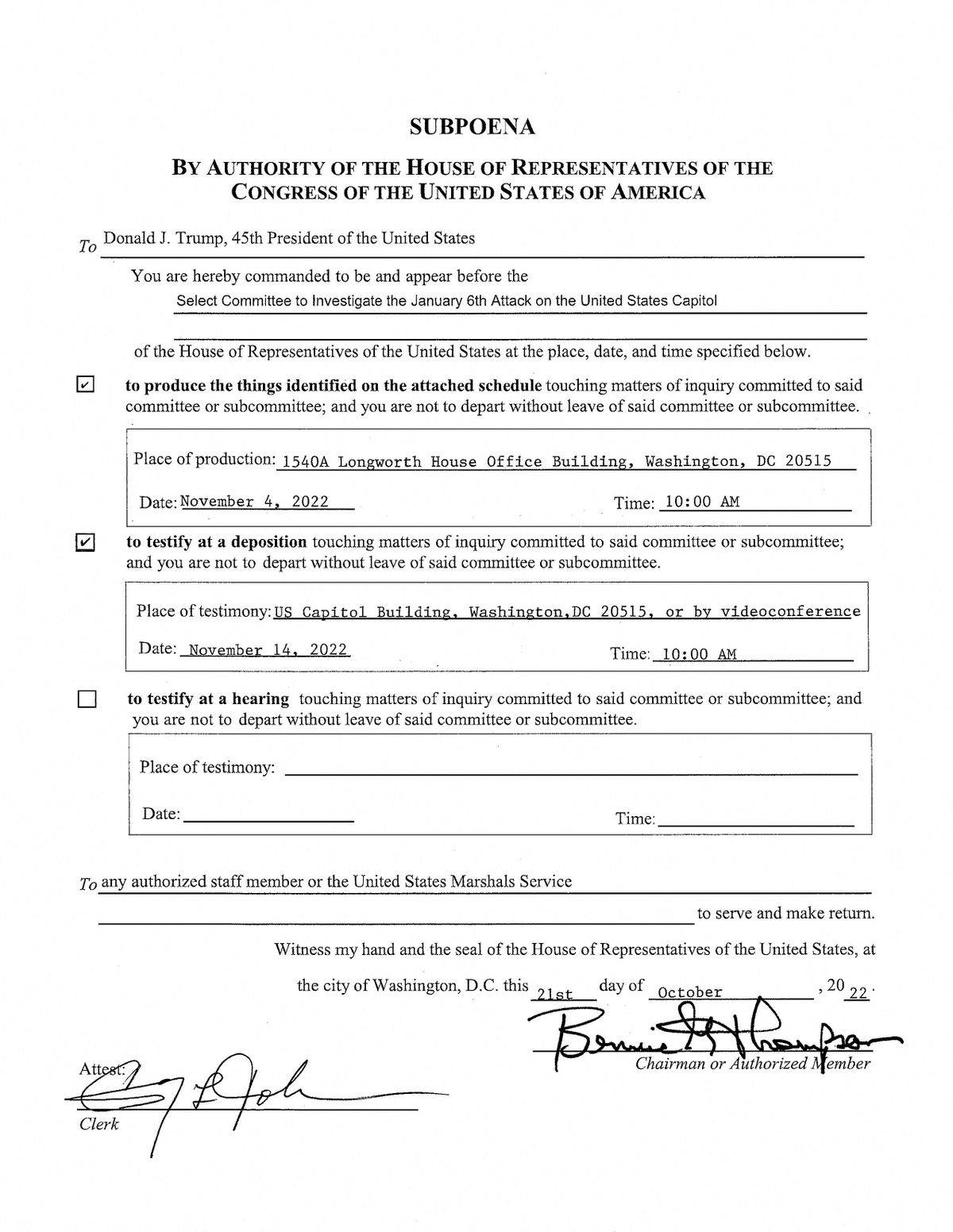 The committee made clear that congressional testimony by a former or sitting president was not unprecedented. The letter listed seven former presidents — most recently Gerald Ford — having testified after leaving office. “Even sitting presidents, including Abraham Lincoln and Gerald Ford” also appeared while still in the White House, it said.

“In short, you were at the center of the first and only effort by any U.S. president to overturn an election and obstruct the peaceful transition of power, ultimately culminating in a bloody attack on our own Capitol and on the Congress itself,” Committee Chairman Bennie Thompson and Vice Chair Liz Cheney wrote Trump.

Committee members have not said how they will proceed if Trump disregards his subpoena.

Federal law says that failure to comply with a congressional subpoena is a misdemeanor, punishable by one to 12 months imprisonment. If the select committee’s subpoena is ignored, the committee would vote to refer the issue to the full House. The House then would vote on whether to make a referral to the Department of Justice, which has the authority to decide whether to bring charges.

The rioters were attempting to stop Congress’ formal certification of Biden’s victory in the 2020 presidential election.

The House Jan. 6 select committee has held a series of hearings making its case – via documents, live witness testimony and recorded testimony from interviews conducted behind closed doors – that Trump was largely responsible for the deadly assault on the Capitol.

They argued that the Republican planned in advance to deny his election defeat, failed for hours to call off the thousands of his supporters who stormed the Capitol and followed through with his false claims that the election was stolen even as close advisers told him he had lost.