ISLAMABAD: The Ministry of Interior in the wee hours of Thursday sought deployment of Rangers to protect the Governor House, Lahore, after the Pakistan Tehreek-e-Insaf (PTI) announced to hold a protest demonstration in front of the official residence of the Punjab governor, ARY News reported.

The interior ministry has written a letter to Director General Rangers Punjab for deployment of sufficient strength of Pakistan Rangers for protection of Governor’s House, Lahore, under section 7 (b) and 10 of the Pakistan Rangers Ordinance, 1959, and section 4 (3) (i) of Anti-terrorism Act, 1997. 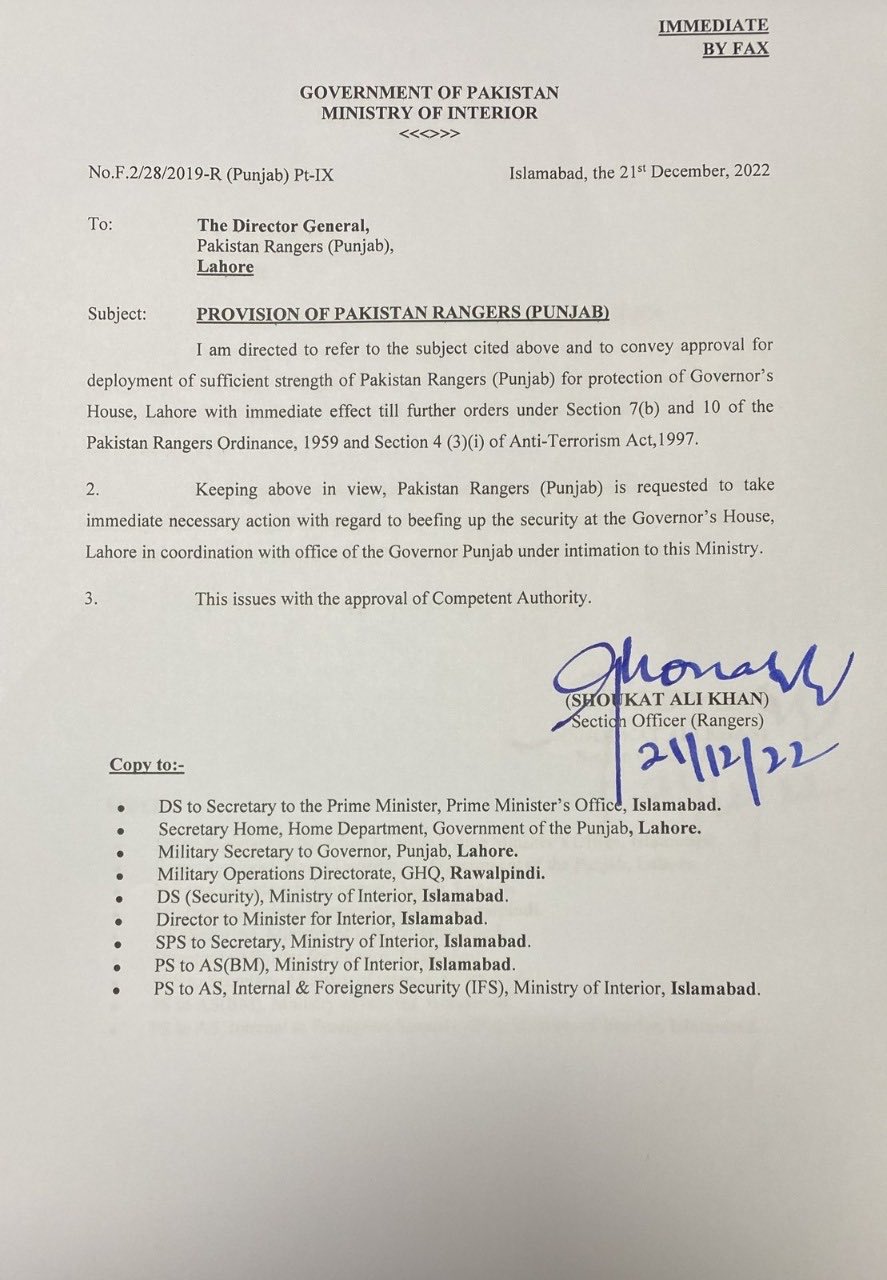 The development comes after PTI had announced to hold a protest outside the Governor’s House at 5pm today to stop the governor from taking any ‘unconstitutional step’.

Speaking to journalists in Lahore, the PTI leader Hammad Azhar had said that the party has decided to hold a public gathering outside Punjab Governor House today (Thursday), wherein Imran Khan will announce a new plan of action.

He also levelled allegations against Pakistan People’s Party (PPP) co-chairman Asif Ali Zardari of ‘horse trading’, saying that PTI Members of the Provincial Assembly (MPAs) were getting telephone calls and Zardari’s money was being used for games in Punjab.

The political crisis in Punjab has intensified after the Centre and the province came face-to-face over the no-trust voting against Punjab Chief Minister Pervaiz Elahi, PA speaker and deputy speaker.

The crisis deepened after the governor and PA speaker rejected each other’s rulings regarding the no-trust voting and summoning of a special session for vote of confidence today.

Sources told ARY News that Punjab Governor Baligh-ur-Rehman is expected to denotify Chief Minister Pervaiz Elahi after he did not seek the vote of confidence from the provincial assembly today.

The notification for removing CM Pervaiz Elahi was prepared and signed by Governor Baligh-ur-Rehman, sources within the Governor’s House said.

It is pertinent to mention here that Governor Punjab Baligh ur Rehman had directed Chief Minister (CM) Chaudhry Pervaiz Elahi to seek a vote of confidence from the Punjab Assembly on December 21.