Russian President Vladimir Putin has arrived in Minsk for talks with his Belarusian counterpart, Alexander Lukashenko, who allowed Moscow to use his country as a staging ground for its offensive in Ukraine.

Footage broadcast by Russian state television showed Putin disembarking from a plane on Monday at a snow-blanketed airport in Minsk and being greeted warmly by his close ally Lukashenko.

Putin’s trip is his first to Minsk since 2019 – before the COVID-19 pandemic and a wave of anti-government protests in Belarus in 2020, which Lukashenko crushed with strong support from the Kremlin.

“During [these talks], questions will be worked out for further aggression against Ukraine and the broader involvement of the Belarusian armed forces in the operation against Ukraine, in particular in our opinion, also on the ground,” Ukrainian joint forces commander Serhiy Nayev said before Putin’s arrival.

Lukashenko has said repeatedly he has no intention of sending soldiers into Ukraine.

The Kremlin dismissed the suggestion that Putin wants to push Belarus into a more active role in the conflict.

Because of the tense situation, however, Putin said he would take the opportunity to discuss military issues with Lukashenko.

Russian Defence Minister Sergei Shoigu and his Belarusian counterpart, Viktor Khrenin, are expected to attend the presidential meeting, according to Minsk.

Russian soldiers who moved to Belarus in October will conduct battalion tactical exercises, the Russian Interfax news agency reported, citing the Russian Ministry of Defence. It was not immediately clear when they would start.

Lavrov spoke with his counterpart, Sergei Aleinik, who took up the post of foreign minister just a few days ago, about the Kremlin’s war against Ukraine, according to the Ministry of Foreign Affairs in Moscow.

They also discussed how Russia and Belarus could defend themselves against political pressure from sanctions imposed by the West, its statement said.

The Belarusian Ministry of Foreign Affairs said Lavrov and Aleinik discussed sanctions, but it did not reference Ukraine. 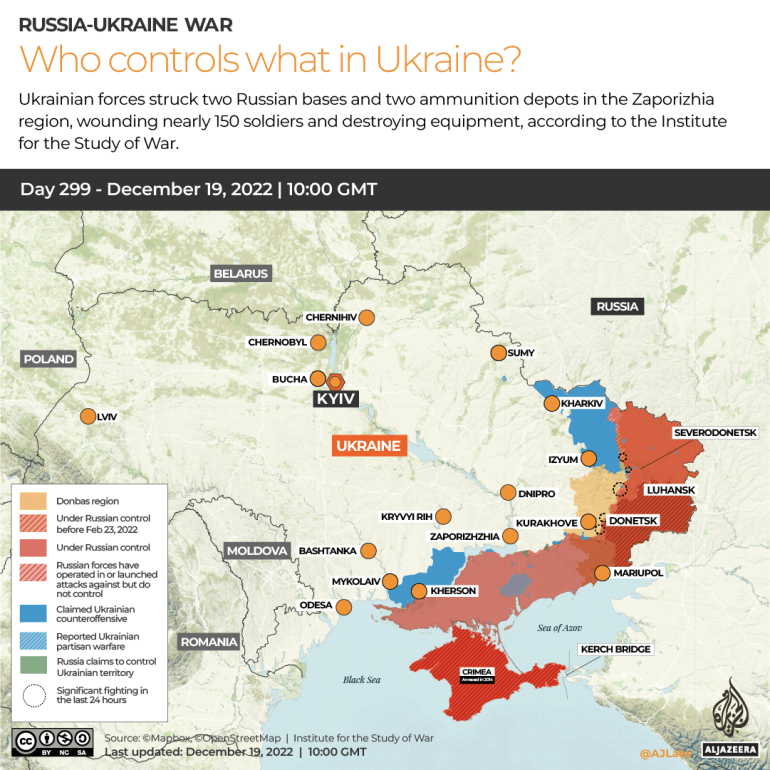 The 10-month conflict in Ukraine is the biggest in Europe since World War II. It has killed tens of thousands of people, drove millions from their homes and reduced cities to ruins.

Ukrainian President Volodymyr Zelenskyy said the country’s armed forces were holding firm in the town of Bakhmut, scene of the fiercest fighting for many weeks as Russia tries to advance in eastern Ukraine’s Donetsk region.

“The battlefield in Bakhmut is critical,” he said. “We control the town even though the occupiers are doing everything so that no undamaged wall will remain standing.”

Zelenskyy on Monday called on Northern European leaders meeting in Latvia to supply his country with a wide range of weapons systems.

Putin casts what he calls Russia’s “special military operation” in Ukraine as the moment when Moscow finally stood up to the US-led West, which he says is seeking to capitalise on the 1991 fall of the Soviet Union to destroy Russia.

Kyiv and the West say that assertion is absurd and Putin has no justification for what they see as an imperial-style war of aggression that has put Russia in control of about a fifth of Ukraine.

Moscow said on Monday that Russian and Chinese forces would hold naval drills from Wednesday to December 27, which would include missile and artillery fire in the East China Sea.

While the drills have been held annually since 2012, Moscow has sought to strengthen its political, security and economic links with Beijing in recent months and sees Chinese President Xi Jinping as a key ally in an anti-West alliance.