The Pakistan Tehreek-e-Insaf (PTI) sought permission from the Islamabad administration on Monday to allow it to proceed from different routes of Islamabad to reach Faizabad in Rawalpindi.

The party has also sought permission for a helicopter landing and take off at Parade Ground for PTI supremo Imran Khan till the gathering or sit-in concludes.

PTI President for Islamabad, Ali Nawaz Awan, moved the application before the district administration on Monday morning and sought permission for PTI’s public gathering at Faizabad on November 26.

The PTI leader has also sought the capital administration’s approval for the landing and taking off of a helicopter, which would carry PTI chief Imran Khan from Lahore to Islamabad, at Parade Ground.

Although the application does not clearly state whether it will be a one-day gathering or a sit-in, the intention is clear that the November 26 rally can be converted into a sit-in. PTI has kept the option open in line with its strategy to keep its cards close to its chest and not give the government too much reaction time.

Recently, PTI leaders Fawad Chaudhry and Shireen Mazari revealed that PTI would definitely move towards Islamabad. “Islamabad is our final destination but wait till Imran Khan’s announcement on the 26th,” Mazari told The Express Tribune.

Keeping the May 25 rally earlier this year and its abrupt ending in view, PTI is carefully moving ahead this time around rather than making tall claims like it did previously. On the other hand, the government has said that it is fully prepared to deal with the PTI rally or sit-in and that there is no pressure on it.

PTI concluded the second phase of its long march on November 19 and Imran announced a rally in Rawalpindi on the following Saturday. The timing of the rally is interesting as the government is expected to announce the name of the new military chief this week and the ceremony for the change of command is to take place on November 29 at Rawalpindi.

Awan recalled that PTI Islamabad carried out a political rally on November 18 from Koral Chowk, Islamabad, to Chak Beli Morr Rawat, Rawalpindi, to participate in PTI’s Haqeeqi Azadi March after seeking permission from the capital’s district administration, adding that the party followed the given terms and conditions and showed discipline in accordance with the law.

“Therefore,” he stated, “I request your kind honour to grant permission to cross/proceed from different routes of Islamabad to reach Faizabad (Rawalpindi) along with permission required for the placement of helicopter landing and taking off at Parade Ground, till the public gathering/sit-in concluded in the supreme and paramount interest of justice, fair play, equity and good conscience.”

The ICT’s office of the deputy commissioner has received the application and no decision has so far been taken on it. 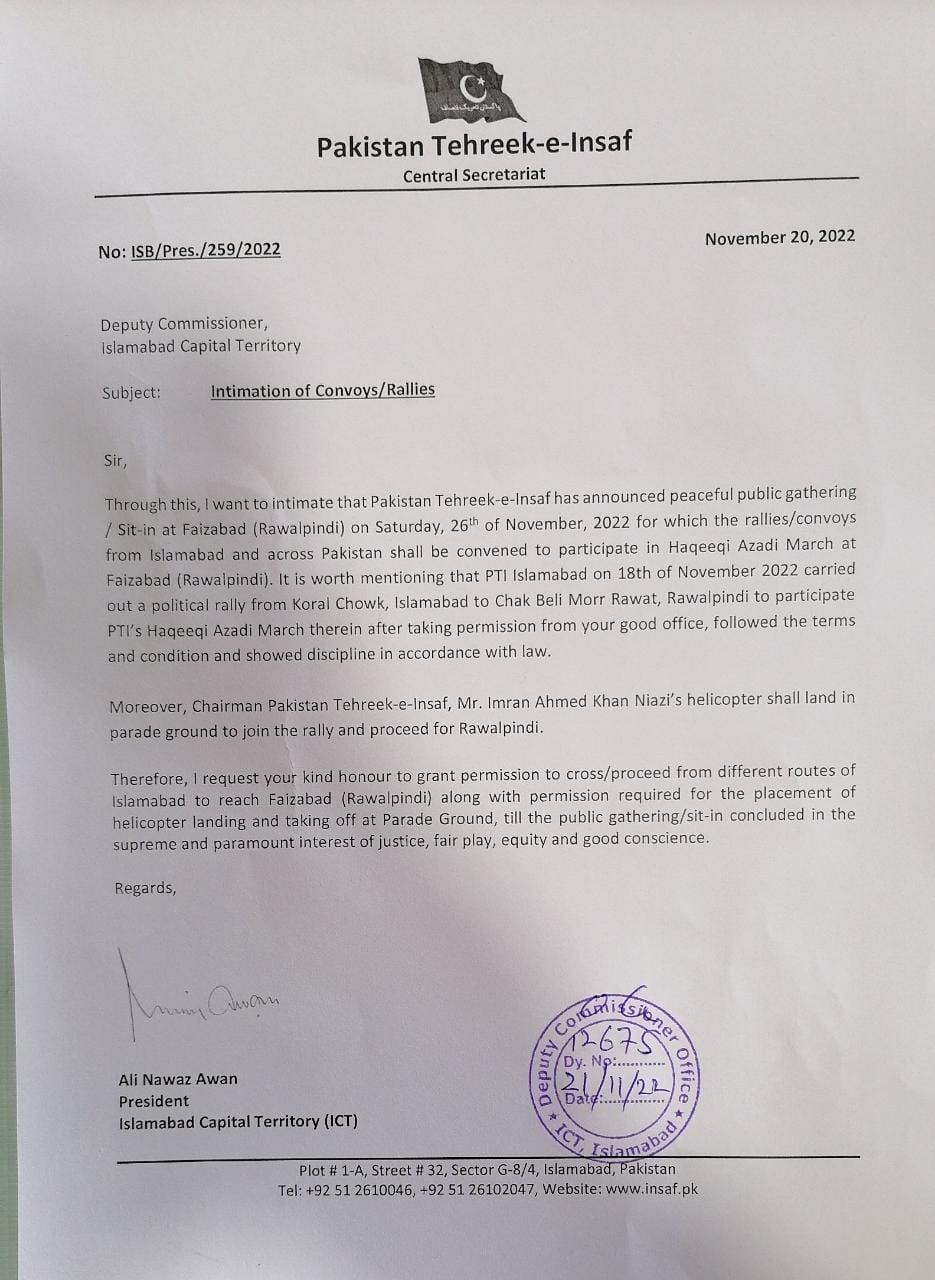