Kylie Jenner joked about walking down the aisle months before Travis Scott was accused of cheating on her with an Instagram model.

“This feels like my wedding day. I am getting married,” the reality star quipped in Thursday’s episode of Hulu’s “The Kardashians” while looking at different Off-White dress options for the 2022 Met Gala.

Her mom, Kris Jenner, looked thrilled about the off-the-cuff comment and proceeded to ask Kylie with a mischievous look on her face, “To who?”

The Kylie Cosmetics CEO, 25, giggled at the momager’s question, telling her, “I have myself.”

When Kris, 66, responded by joking that Kylie didn’t know where the night could take her, the makeup mogul poked fun at the idea, saying, “You are right. Always be prepared to get married.”

Kylie told her mom, Kris Jenner, that one should “always be prepared to get married.” 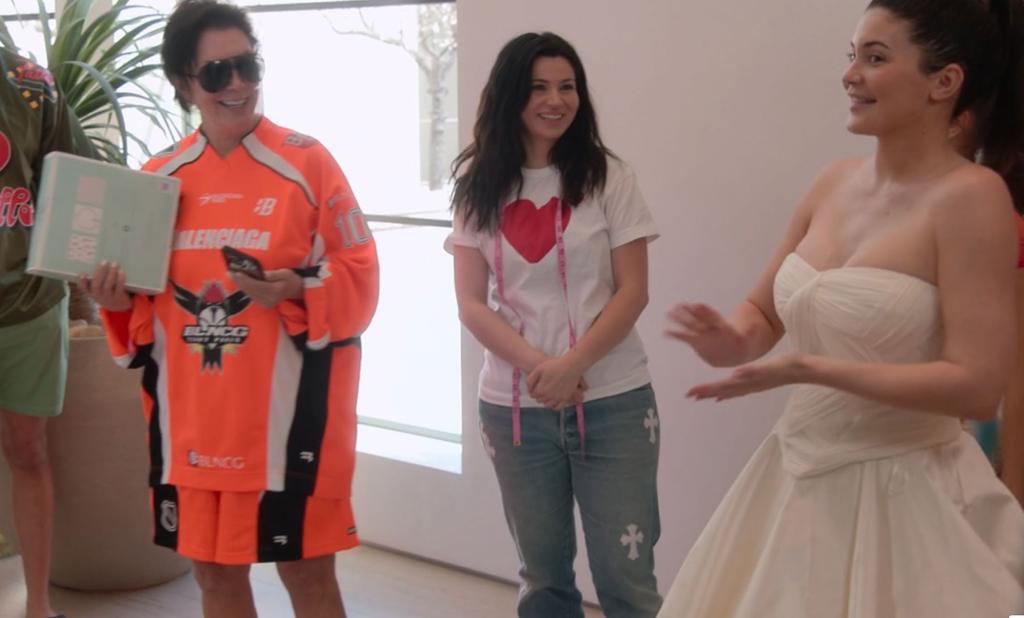 Kylie told her mom, Kris Jenner, that one should “always be prepared to get married.”

The “Vanderpump Rules” star revealed last month that she “might…

Kylie shared in a confessional that while she was worried she’d look like a bride at the May 2 gala, she also wasn’t opposed to it.

“When I first tried this on, it’s giving me very wife, bridal vibes, so I feel like I’m a little concerned that it’s going to look like I’m getting married, but I also kind of love that,” she told viewers.

Sure enough, Kylie ended up wearing a long Off-White wedding-like gown and a baseball cap with a veil to the star-studded soirée in New York City, where the theme was “Gilded Glamour.”

The “Life of Kylie” alum said at the time that she was honored to wear the design by late Off-White founder Virgil Abloh.

“Virgil and i were supposed to go to the Met together before it got postponed in 2020,” she explained on Instagram.

“To celebrate V tonight and his incredible legacy truly means the world to me. i’m humbled to wear this dress and honor my talented beautiful friend. we felt you tonight Virgil and love you forever. & thank u to the entire @off____white team !!”

Kylie did not attend the Met Gala with Scott, whom she has been dating on and off for five years.

While the couple were going strong at the time, having just welcomed their second child in February, they hit a rocky patch in October when model Rojean Kar claimed Scott, 31, had cheated on Kylie with her.

Kar, who was romantically linked to the “Sicko Mode” rapper in 2013 prior to his relationship with the “Keeping Up With the Kardashians” alum, claimed in videos on her Instagram Story, “You cheat on that bitch every single f–king night. The whole f–king city sees it! Don’t do this.”

Kar also posted a video of Scott on a set, seemingly as evidence that they were together.

The Grammy nominee was quick to deny the accusations, though, writing on his Instagram, “It’s a lot of weird s–t going on. An uninvited person was sneaking photos on what was supposed to be a closed set while I was directing a video. I don’t know this person. I’ve never been with this person.”

He added, “Please stop with the continuous cyber games and the fictional storytelling.”

Kar further claimed they had spent Valentine’s Day together, which Scott also denied.

Kylie and Scott started dating in April 2017. They briefly broke up in October 2019 but rekindled their romance in May 2021. They share two kids: 4-year-old daughter Stormi and a 9-month-old son, whose name they have yet to announce after changing it from Wolf.

Jesse James’ pregnant wife calls off divorce after one day

Infographic: How much oil does Russia produce? | Infographic News

Orthogonal Trading is “Effectively Insolvent,” According to Maple Finance