Bella Hadid appeared in the Coperni fashion show during Paris Fashion Week 2022 on Friday, but her outfit was a DIY affair.

As captured by New York Times fashion critic Vanessa Friedman and many others on social media, the model, 25, appeared on the runway in nothing but a pair of underwear and heels, covering her breasts while a team of three men spray painted her.

They strategically sprayed a thick white latex around her torso, creating an opaque layer as the model stood still, adjusting her arms.

Eventually, a mid-length, solid dress formed that included a thigh-high slit and off-the shoulder sleeves, that were elegantly draped before Hadid walked off the stage to close the fashion show.

Coperni is known for their daring styles — the brand went viral in April for their purse made of hand-blown glass, carried by Kylie Jenner and Doja Cat.

Fans went crazy for the made-before-their eyes look, with one writing on Twitter, “I’m speechless… this is art.” Another said, “Fashion becoming actually really entertaining again is the world healing.”

The model was covered in white wearable paint. 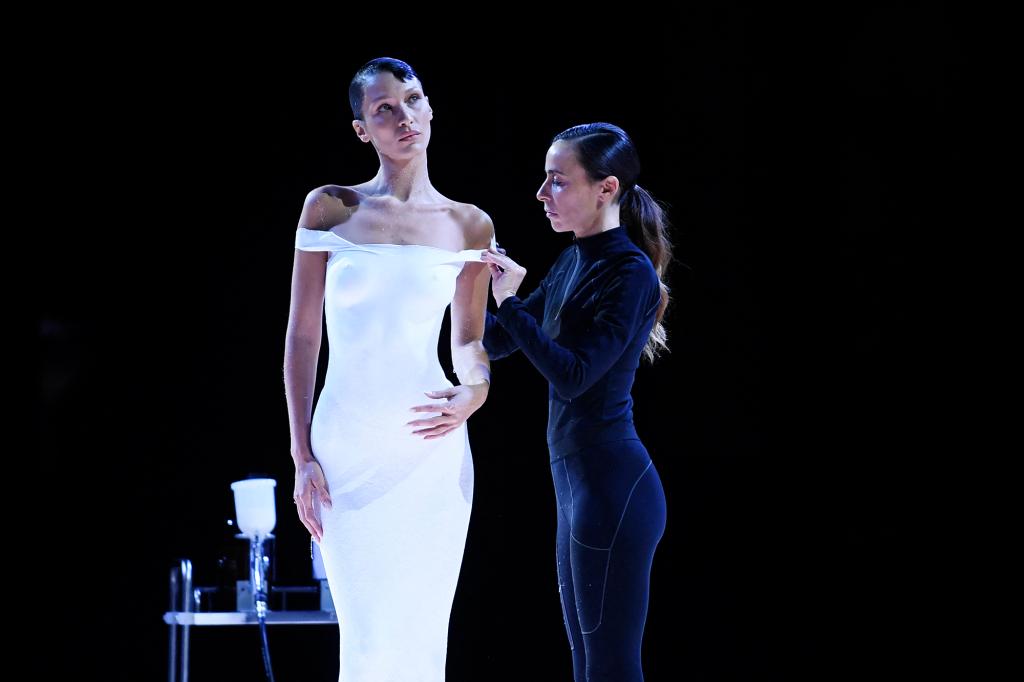 The model was covered in white wearable paint.

“She’s always been quirky, even before ‘Housewives,'” the pop legend…

Hadid has been wowing all over the catwalk this month, hitting the runway earlier in the day for Victoria Beckham and walking in the Isabel Marant fashion show with sister Gigi Hadid on Thursday. She also appeared in London earlier this week for Burberry, and Milan and New York City before that.

As Fashion Month comes to a close, with major shows like Valentino, Balenciaga, Louis Vuitton and Chanel still to come, it’s likely that the star will make more appearances on the runway — though certainly none will be as memorable as this.